Red Lobster is a great plaice to eat fish on Friday!

Where we went:  Red Lobster on St. Laurent in Riverview is definitely on our ‘favourite’ list. However, we don’t often get to go there because, especially on Friday evenings, the place is filled to overflowing. So when Greg made the suggestion that we go there, none of us held out much hope that we would actually be able to pull it off. As has become our habit of late, we called in advance to check out the wait times for a group of eight (yes, we were one over normal this week).

Somewhat to our surprise, we were told that a wait of twenty minutes maximum was in store for us if we came right away. Still expecting the worst, we selected Wild Wing as a back-up, should the wait turn out to be longer than claimed. 20 minutes is about the most we can endure with three young ladies in tow 😉 Once again, the parking lot status seemed to indicate that business was good on this particular evening. I cannot speak for the rest of Ottawa or other parts of Gloucester, but in the East End, business is booming, at least on Fridays.

Although the restaurant was indeed full, our hostess took it upon herself, quite willingly as it appeared, to regale our Three Musketeers, Amber, Lara and Fayth with facts and anecdotes about the lobsters that were languishing in the tank in the waiting area. She even took one out for them to inspect more closely, much to their delight. If our wait was more than 15 minutes, we simply did not notice.

What we ordered: It is relatively rare for Dorothy and I to order wine on a Friday evening but since we felt that this was an auspicious occasion, having determined that it had been almost two years since our last visit, we ordered a half liter of Peller Estates Riesling. The wine turned out to be a reasonable accompaniment to our meals but not outstanding. For a main course, I opted for something light, knowing in advance that Red Lobster never scrimps on their portions. Skewered Shrimp and Bacon Wrapped Scallops with Peach Bourbon BBQ sauce over a bed of crispy deep fried onion with a side of broccoli was my choice. Dorothy opted for a ‘shrimp feast’ consisting of garlic, crab-stuffed and shrimp Alfredo with a side of fries. Norma chose crabmeat in Alfredo sauce.

Two of the girls predictably chose chicken strips and fries and Amber chose popcorn shrimp. Unfortunately, the layout of the table and our seating arrangement precluded me from recording the choices of Debbie and Greg.

What we got: As usual, the three girls were served first and were apparently happy with their choices though somewhat suprisingly were not as enamoured with the warm, moist, savoury biscuits served in lieu of bread as the adults. The side salads, both garden and caesar were better than average, not ALL lettuce as is often the case!

Norma’s crabmeat Alfredo dish was huge but apparently hot and tasty! Dorothy’s shrimp feast was also voluminous but she managed to finish it (with a little help from me). As for my own dish, the description was better than the reality. The presentation was enticing and the crispy onion was delectable but the peach bourbon BBQ sauce was overly sweet and quite tangy and completely overshadowed the delicate flavours of the shrimp and scallop.

No one partook of dessert of which there is a good selection, partly because we were all full but also because the cost is prohibitive with $7 appearing to be the norm!

Worthy of note: The girls had so much fun with the hostess at the entrance that they went back as soon as they had finished their meals which left the adults time to chat and relax. A fitting end to a pleasant evening! Cost for two including wine but without dessert and coffee: $65.00 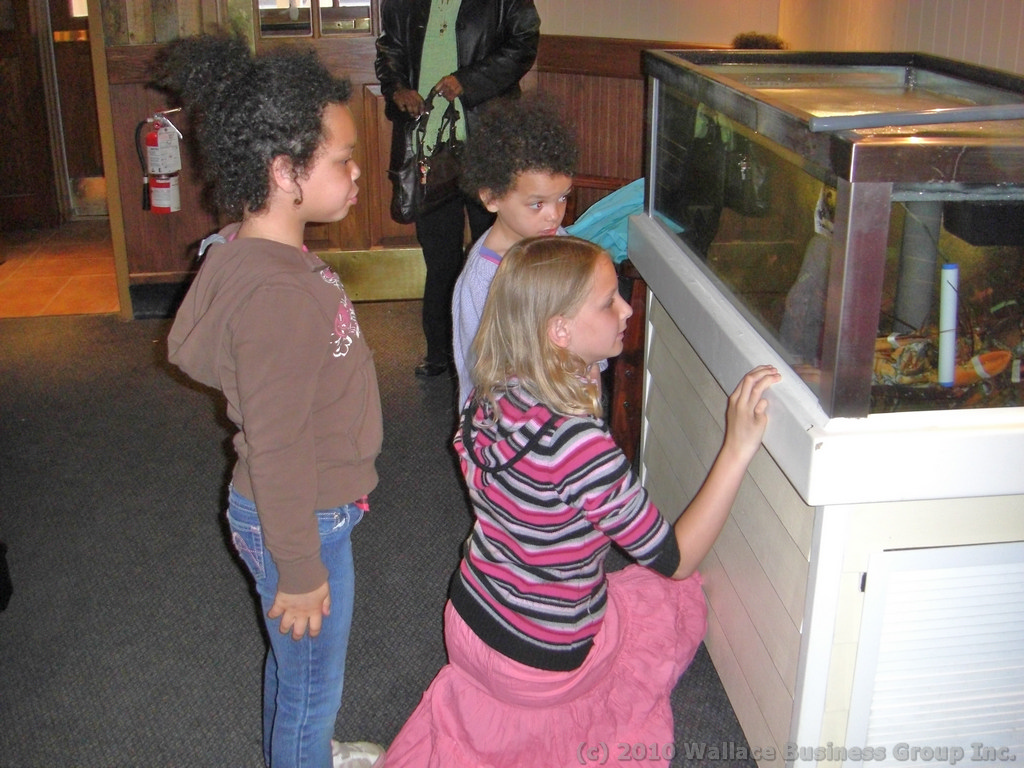 They look interesting in the tank, but none of the girls likes it on the plate!